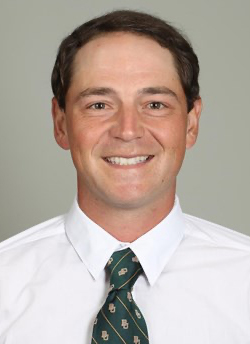 Michael Woodson finished his third season as an assistant coach for the Baylor men's tennis team.

From May 13 to May 24, 2018, Woodson was the interim head coach prior to Brian Boland's hire as the Director of Tennis.

During the 2017-18 season, Woodson helped guide Baylor to its 21st consecutive NCAA Tournament appearance and a 21-10 overall record without a senior on the roster. Woodson mentored three All-Big 12 honorees in Sven Lah, Roy Smith and Will Little. Lah and Smith finished their freshman seasons with an impressive 17-2 doubles record and earned first team and all-tournament recognition. Little compiled a 17-9 overall singles record and his second straight All-Big 12 honor while earning his first all-tournament award.

In his first season in Waco, Woodson contributed immediately as BU advanced to its 17th Sweet 16 appearance in the last 19 years. He helped coach senior Max Tchoutakian to a 15-3 singles record and guided Johannes Schretter and Jimmy Bendeck to an 11-3 doubles record. During the summer, he served as the USTA National Collegiate Team coach.

Prior to coming to Waco, Woodson had been a member of the Valparaiso men’s tennis coaching staff since the 2012-13 season, after concluding a three-year career on the court for the Crusaders. In May 2015, Woodson was promoted to associate head coach and went on to help Valpo set a school record for wins (22-6), claim conference regular season and tournament titles and earn the program’s first-ever NCAA Championship appearance.

During his playing career with the Crusaders, Woodson was a three-year starter who split time between No. 5 and 6 singles, while appearing at No. 2 and 3 doubles for the Brown and Gold. For his senior season, Woodson was named a team captain for the Crusaders. Woodson was recognized with the Bill Steinbrecher Sportsmanship Award and the athletic department’s Laurel Award, which honors the graduating senior student-athlete with the highest cumulative grade point average.

Woodson graduated from Valparaiso in May of 2012 as a triple major in biology, chemistry and exercise science. He also earned a master’s degree in sport administration from Valpo in December of 2013.

He married his wife, Vanessa, in July 2017. The couple welcomed their first child, Jordyn, in November 2017.