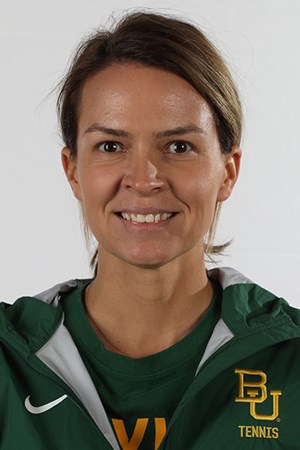 Baylor Athletics Hall of Famer Lenka Broosova returned to Baylor as the Associate Head Coach in December of 2020.

Broosova comes to Baylor following a seven-year stint as an Assistant Coach at the University of Tulsa. There, she helped lead the Golden Hurricane to three American Athletic Conference titles in 2015, 2016 and 2018. She was promoted to Associate Head Coach in 2017, and she also helped guide Tulsa to the NCAA Round of 16 in 2018 while the program achieved its highest NCAA ranking at No. 14.

Prior to her time at Tulsa, she played two years professionally from 2011-12 and was Baylor’s Director of Tennis Operations from 2010-11.

Broosova should be no stranger to Baylor tennis fans. Her impressive resume on the court for the Bears resulted in a 2020 induction into the Baylor Athletics Hall of Fame. She left Baylor with 154 singles wins and 120 career doubles victories – both of which stand as the all-time record.

A three-time All-American in doubles and two-time All-American in singles, Broosova was named the Big 12 Player of the Year as a senior in 2010. She helped Baylor to a sweep of the Big 12 regular-season and tournament titles in her four-year career (2007-10) and four NCAA Tournament appearances, including the NCAA semifinals in 2008 and the quarterfinals as a senior when the Bears achieved their first-ever No. 1 ranking.

Broosova graduated from Baylor in 2010 with a degree in speech communication, and she is a native of Banksa Bystrica, Slovakia.