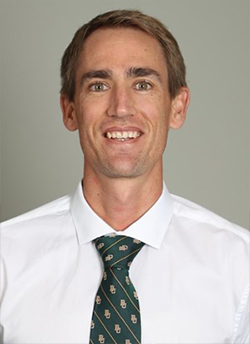 Last season, he was a part of the team's 13th NCAA quarterfinal appearance and ninth Big 12 postseason title run. He mentored Big 12 Individual Champion and All-Big 12 honoree Will Little at No. 4 singles as well as All-Americans Jimmy Bendeck and Sven Lah. He guided Little and All-Big 12 honoree Matias Soto to an 8-4 record on the doubles court.

Izak van der Merwe (pronounced EE-zah-k vun dur Mer-vuh) competed on the ATP World Tour from 2005 to 2014, earning a career-high No. 94 doubles ranking and No. 113 singles ranking and winning a total of 17 ATP Challenger Tour singles and doubles titles. He was a singles semifinalist at the SA Open in 2011 and a quarterfinalist at the U.S. Grass Court Championships a year later.

He also competed as part of Team South Africa in 13 Davis Cup ties from 2006 to 2014 where the team made four World Group Playoff appearances.

A Johannesburg, South Africa native, van der Merwe played collegiate tennis at Old Dominion and was the school's first two-time ITA Collegiate Tennis All-American and the only Monarch to reach the national semifinals in the NCAA, All-American and & ITA Indoor national championships.